Samosas are an ancient Middle Eastern dish. Made from dough that is filled with some type of a filling -- typically a spiced potato mixture -- that is then baked or fried, samosas make a delicious lunch or dinner.

To make these spiced potato samosas, you will need to make two main components: the dough and the filling. This recipe makes 12 samosas.

Prepare the dough in advance if you wish. You can keep it refrigerated for up to three days before making the samosas.

Make the filling while the dough is chilling.

Form and Fill the Samosas

To fill the samosas, you'll roll out the individual dough balls, halve them, roll them into cones, and fill them with your filling. 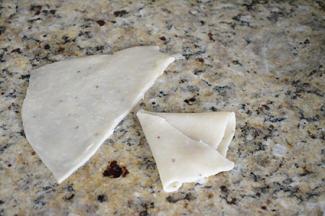 Finally, deep fry the samosas until the dough is golden brown.

While potatoes are the traditional filling, you can also make fillings with spiced ground meats.

Today, most people think of samosas as part of Indian cuisine, and they do go well with other Indian or Asian dishes. Samosas make a great lunch or dinner entree. Because of their small size, they're also a terrific appetizer or snack. While they are best fresh, you can store samosas in the refrigerator in a tightly sealed container and reheat them, although they won't be as crispy.

Serve the samosas with a number of dipping sauces, such as chutney, plum sauce, raita, and hummus.

If you've never had a fragrant samosa, you're missing out. Enjoy these delicious filled pastries with their fragrant filling for a meal or snack you won't soon forget.

0
Comments
© 2006-2020 LoveToKnow, Corp., except where otherwise noted. All Rights Reserved.
How to Make Samosas