Chicken roulade is a remarkably versatile dish that tastes great and looks beautiful. Essentially, roulade is chicken meat that has been pounded to be thinner and is rolled around a filling. With that basic beginning, you can make an array of chicken roulade recipes.

Making chicken roulade takes a few different steps. Once you understand the basics, however, you can repeat the recipe with a variety of flavor variations.

You can make chicken roulade from either a chicken breast or a chicken thigh, depending on your personal preference. Thighs will make smaller rolls. Choose boneless, skinless thighs or breasts, or remove the bone and skin yourself, if you have the skill to do so, while leaving the breast or thigh all in one piece.

Breasts and thighs are uneven in thickness throughout the piece. To make the piece more uniform -- and to have more surface area to roll around the filling -- you need to butterfly it. To butterfly a chicken breast: 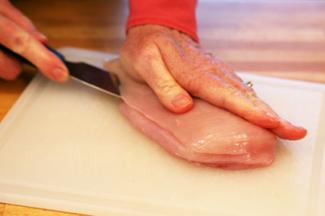 To butterfly a chicken thigh, follow steps three through six above.

Next, you need to pound the chicken so it is even thickness throughout. To do so:

Fill the Chicken With Stuffing 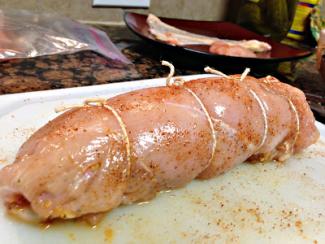 Alternatively, you can make more of a pinwheel appearance using the following method:

Pan sauce is optional, but it can add flavor and moisture to your chicken. While the chicken rests, make a pan sauce from the drippings in the roasting pan. To make the sauce:

Plate the roulade by cutting it into slices and fanning it on a plate. Spoon the sauce over the top.

One of the great things about chicken roulade is just how versatile it truly is. You can use all kinds of flavor profiles to make the stuffing. Try one of two very different versions. 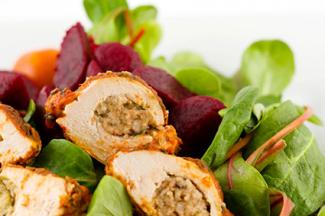 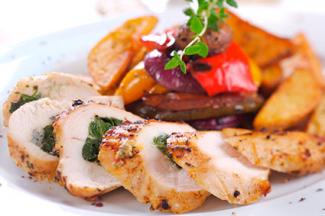 This spicy roulade stuffing adds a lot of flavor to your chicken. It makes enough stuffing for four chicken breasts.

Making a chicken roulade is relatively easy once you have the technique down. When you combine it with a delicious side dish such as loaded mashed potatoes, as well as a vegetable, such as string beans, you have a delicious meal to serve to your family.

0
Comments
© 2006-2020 LoveToKnow, Corp., except where otherwise noted. All Rights Reserved.
How to Make Chicken Roulade