Ostrich is a lean and tasty meat with a rich flavor. Due to its very low fat content, however, cooking it may be different than fattier cuts. However, using the right cooking methods can help you to make the most of this healthy meat.

Because ostrich steaks are so lean, they require a high heat, quick cooking method to keep them tender and prevent them from drying out. Methods such as grilling and sautéing are perfect for this.

To grill an ostrich steak:

Sautéing is another high temperature method that will work well for the steak. 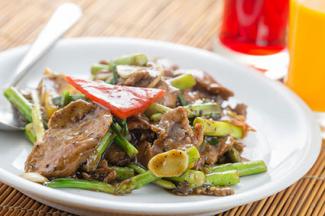 You can also cut ostrich steaks and fillets into thin slices before cooking them and stir-fry them with your favorite vegetables.

Ostrich roasts present a bit of a challenge, because they have only very small amounts of intramuscular fats, which makes them prone to drying out in the long cooking process. To keep them from drying out, the World Ostrich Association recommends cooking them in a roasting bag, which will help retain the moisture; so will braising with liquid over very low heat.

When cooking an ostrich roast, which comes from the upper leg of the ostrich, use a roasting bag.

You can braise on the stovetop, in the oven, or in a slow cooker. When you braise, you add liquid and cook the roast, covered, over low heat to help retain and infuse moisture.

Cooking ground ostrich is very similar to cooking ground beef. Use high temperatures and cook it quickly, or it will dry out.

Cooking ostrich patties follows a similar method to cooking steaks. You can either grill them or sauté them over high heat.

You'll need a bit of oil when you cook ground ostrich into crumbles to help keep it moist.

Cooking ostrich meat is a fairly straight forward process. Because it is so lean, the most important thing to do is watch it closely so you don't wind up with a tough, overcooked piece of meat. With the right cooking method and careful attention, you'll make delicious meals using this tasty meat.