The mention of French cuisine frequently conjures visions of fancy pâtés, escargot, and rich desserts. French sandwiches normally are not part of that image and yet they hold a special place in the culinary repertoire.

A simple baguette is the preferred bread for sandwiches made in France, although the baguettes are smaller in size than traditional sticks of bread. The only deviation from this is the crustless pain de mie bread used to make a croque monsier (see recipe below).

Common filling ingredients are simple meats, cheeses, lettuce, tomatoes, sliced hard-boiled eggs, olives, and a thin layer of top-quality butter and sometimes Dijon mustard. The French are not fond of sandwiches stuffed to the gills, nor are they big on condiments like mayonnaise and ballpark mustard as Americans are. Instead, they prefer a modest amount of filling so their true flavors can shine through instead of being swallowed up by a condiment.

Among the most-ordered sandwiches in France are: 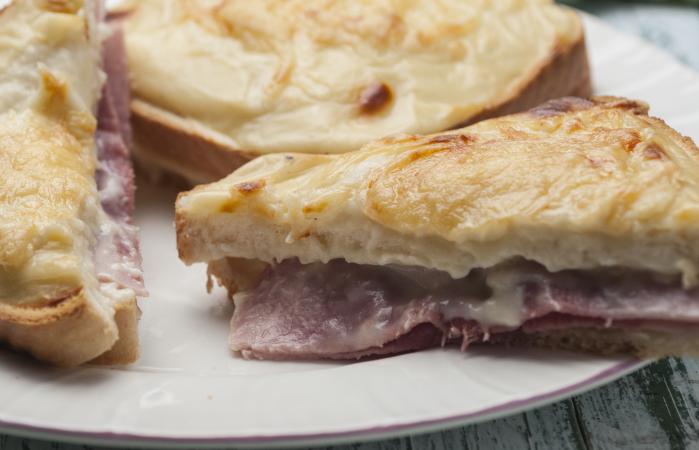 At first glance, this recipe looks like nothing more than a grilled cheese sandwich that Americans have been making for centuries. It even calls for plain sliced bread instead of the traditional baguette. But don't be fooled. Accounts of people becoming dewy-eyed with emotion after tasting a croque monsieur are widespread.

Note that even though this French sandwich name literally translates to "crispy mister" in English, the verb croquer also means "to bite into" and "to make a crunchy sound," which is the case with this grilled treat served with a sauce. Many believe it is the inspiration for the American Monte Cristo sandwich. Another French version of croque monsieur is croque madame which is essentially the same sandwich except a fried egg is placed atop the sauce.

For the Cheese Sauce:

Directions for the Sandwich

Directions for the Cheese Sauce

What French Sandwiches Are Not

If you conducted a man-on-the-street interview about what constitutes a French sandwich, two answers would likely dominate the responses and both would be wrong.

This hot roast beef sandwich is among the top sellers at diners and cafeterias in the States. It is conventionally served on a French roll or baguette with a small cup of beef juice or beef broth on the side in which to dip the sandwich.

Other than the roll, the French had nothing to do with this sandwich. Two Los Angeles restaurants claim to have invented it in 1908 and neither served it with the side of broth. The chefs dipped the roll into the cooking juices in the kitchen before they placed the beef on a serving plate.

Yes, croissants are very French, but you would be hard-pressed to find a sandwich served on one in France. They are typically eaten for breakfast (perhaps accompanied by a smattering of marmalade) with a cup of dark, strong coffee.

French up your next batch of sandwiches just by serving them on baguettes and using good-quality European French butter as a condiment to appreciate fully the flavors of French sandwich fillings. Or take the time to make the croque monsieur that is prepared with crustless good-quality white bread with a close crumb.