A truffle is a kind of mushroom (technically, the fruiting body of a fungus) which is coveted by chefs for its rich, earthy, woody taste. These mushrooms are very picky about where they grow, only taking up residence underground and under very specific conditions. Ounce for ounce, they are the one of the most expensive foods in the world.

Generally, only two kinds of truffles are hunted and prized in the culinary world: white truffles and black truffles. These both grow in similar circumstances (underground, around tree roots, in neutral or alkaline soil), but they are each different from one another. The truffle is a seasonal fungus with varying growth patterns depending on the variety of truffle and its native country.

In addition to being picky about where they grow, they cannot be seen on the surface of the soil with the naked eye. A trained animal is required to find truffles. Traditionally, for centuries, this animal was a pig; today, it is often a dog as pigs have a bad habit of eating the truffles they find until the animal's handler can stop it. 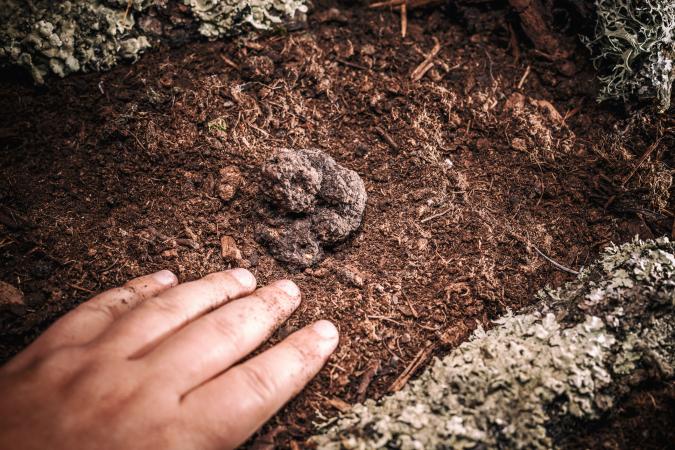 Black truffles (Tuber melanosporum) are slightly easier to find than their white counterparts, though still a challenge. They have a symbiotic relationship with oak trees found in Perigord, in the southwestern region of France, though they are sometimes also found in Spain, Italy (Umbria especially), Croatia, and Slovenia.

Black truffles need to be protected from extreme summer heat or extreme winter cold. They can be damaged if frost gets too deep into the soil in which they grow. Their harvest season is relatively short and they can only be found from September through December.

The white truffle (Tuber magnatum) - the "trifola d'Alba Madonna" or "Truffle of the White Mother" - is less commonly available than the black truffle, and generally grows in the Piedmont region of northern Italy. They are also grown in Le Marche (in northeastern Italy) and commercialized heavily there, including an annual truffle festival. Some regions in central Italy, including Molise, Abruzzo and parts of Tuscany also produce some white truffles. Even some parts of nearby Croatia sometimes yield white truffles.

White truffles are traditionally found in calcareous (mineral-rich, lime) soil around the roots of oak, beech, and hazel trees in temperate climates. These Italian truffles see most of their growth from December 1st to the end of January.

While white and black might be the most commonly sought, there are other types people hunt.

Truffles, simply put, are very hard to find and harvest. This rarity is the main reason for the high price tag that they carry. Truffles only grow underground, forming a symbiotic relationship with the trees whose roots they grow near. They prefer beech, birch, hazel, hornbeam, oak, pine, and poplar trees. The soil they grow in tends to be well-drained soil that is higher alkaline (around 7 or 8.5 Ph). They are generally found about 30 centimeters or less below the surface of the soil.

Truffles have been hunted for centuries in the old-fashioned way, though some farmers are experimenting with cultivating truffles. This is proving possible, but a challenge and a matter of much experimentation and failure.

Because of the gourmet nature and extremely high price point of truffles, people are often trying to break into truffle farming or hunting. To try and save on labor and the uncertainty that comes with harvesting, enterprising farmers are trying to grow them on farm land, in backyards, or in basements. Due to the symbiotic nature of the truffle and its tree, however, this is proving to be extremely difficult. However, Australian farmers are growing introduced black truffles and there have been attempts to farm them in the U.S. as well, to varying degrees of success.

If an earthy, musky, mushroomy smell and taste sound just right, then a few shavings of truffles on a dish could elevate the quality from great to unmatched. But since truffles are currently quite expensive (over $1200 per pound of black truffles and more than $2000 per pound of white truffles) and mass farming attempts for them have not been overly successful, be prepared to pay top dollar for this fungus for the foreseeable future.