What is gelato? Many people know that gelato is a lot like ice cream, but most don't understand what makes this frozen dessert a particularly special treat.

Exactly What Is Gelato?

Gelato is similar to ice cream and was originally perfected in Italy. While you can get gelato all over the world, many purists believe that it's only truly gelato if you get it in an authentic Italian gelateria.

Differences Between Gelato and Ice Cream

The primary differences between gelato and regular ice cream are very important. First off, gelato is a lot denser than ice cream. Your regular everyday ice cream has quite a bit of air in it, which allows the finished product to nearly double in size. As you can imagine, this makes the flavor weaker, which means you need to eat more of it to get the same flavor effect. Gelato is much richer and creamier than ice cream, which means that every little bite packs a major punch of flavor.

Gelato also has far less butterfat than standard ice cream. Regular ice cream has anywhere from 18 - 26 percent butterfat, while gelato has somewhere around ten percent, depending on the flavor (this, of course, excludes toppings). The difference comes from the fact that gelato is not made entirely with cream, but rather is mostly regular milk. This doesn't compromise the taste, though. Since there is less fat, gelato does not need to be frozen as cold as regular ice cream, meaning that it actually melts in your mouth faster.

Many folks believe that too much butterfat in ice cream actually masks the true flavor behind a "fatty" taste. This lingering fat flavor makes regular ice cream very rich, but does not lend anything to the flavorings of the dessert. Gelato, having less fat, gives you a more pure flavor experience.

Since gelato is frozen at a warmer temperature, it is also kept at temperatures that are warmer than regular ice cream. There is a roughly 12 degree difference in the two, which means that gelato isn't frozen solid like most frozen desserts are. With a softer consistency, the flavors mingle over your tongue faster than regular ice cream and the tastes comes off as much stronger and more robust.Also, since there is less air in gelato and it is kept at a slightly lower temperature, it is much easier to scoop. In fact, you do not use a regular ice cream scoop to dish out gelato - you use a spatula that looks something like a slightly curved paddle.

How to Make Gelato at Home 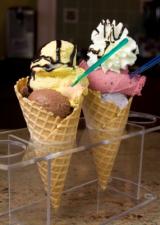 To make gelato you need a special kind of ice cream maker. While these machines are generally large and meant for commercial use only, there are lots of ways to make gelato at home. You can try picking up a home gelato maker, or else use a gelato recipe in a regular ice cream maker. Either way, you're in for a great treat.

Are you still asking yourself, "What is gelato?" If you're looking for more details about the difference between gelato and regular ice cream, here are some links that will help you in your research.

0
Comments
© 2006-2020 LoveToKnow, Corp., except where otherwise noted. All Rights Reserved.
What Is Gelato