If you've never had gourmet desserts, you may find yourself asking "what is baked Alaska?" when you see it on the menu. While it is a simple dessert, there are actually many types of baked Alaska and it can be whatever dessert you want it to be.

What Is Baked Alaska?

Simply put, baked Alaska is a hot ice cream dessert. The chilly ice cream center is surrounded by a thin cake layer on the bottom and a thick layer of meringue on the top and sides, both of which effectively insulate the ice cream against the heat of the baking that gives the dessert its characteristic carmelizing on the meringue. Most often the dessert is baked briefly in a very hot oven or under a broiler to firm and carmelize the meringue, though it is also possible to use a hand torch like what you would use to carmelize crème brulée.

The exact origins of baked Alaska are unknown, and several different references to similar desserts can be found throughout the nineteenth century. The origin of the familiar name; however, can be traced to 1876, when Delmonico's Restaurant in New York City unveiled the treat as a tribute to the Alaska Territory. In addition to baked Alaska, similar desserts are also known as glace au four, Norwegian omelettes, and omelet surprise.

Today, baked Alaska is a popular gourmet dessert and is often served on cruise ships, at holiday dinners, and at upscale restaurants. Fortunately; however, the dessert is also easy enough to make that you can serve it in your home whenever you wish.

The classic baked Alaska recipe simply calls for a thin layer of sponge cake topped with a scoop of ice cream, then layered with meringue on the top and sides. Once assembled, the confection is heated briefly in a hot oven to brown the meringue, then served immediately. Any flavor of cake and ice cream can be used, though vanilla or Neapolitan ice cream and a white cake are most typical of classic baked Alaska. Fortunately, you can easily adjust the recipe for your favorite tastes, and there are many unusual combinations to choose from. Some popular recipes include:

It is easy to take a simple baked Alaska recipe and make it your own with only minor adjustments. Popular variations include:

While this is a simple dessert that is easy to make once you've tried it, there are tips that can help it be even easier to create. 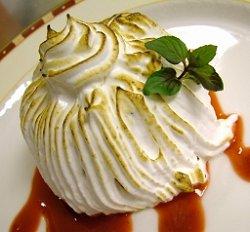 A gourmet dessert deserves a classy presentation, even if it is simple to make. To give your baked Alaska an extra special touch…

The question isn't "what is baked Alaska" but rather "what isn't baked Alaska," since this easy gourmet dessert has many variations to suit personal tastes and different occasions. From a simple treat to subtly coordinating flavors, this dessert is one you can make many times and always enjoy anew.