Learning how to temper chocolate isn't as hard as it looks. A lot of people think that the tempering process is difficult and complicated, but really, all you need to do is pay attention and you'll have great results.

What Is Tempering Chocolate?

Do you know how chocolate has that nice, shiny surface and a characteristic snap when you break a piece off? This is all because of tempering. Chocolate is full of little crystals, and there is one particular kind that you want to form: beta crystals. Once you've got the proper kind of crystals formed in your chocolate, you'll have a nice, shiny bar of chocolate that looks like you're used to seeing in the grocery store.

It's important to know, though, that chocolate can easily lose its temper - no joke - if it's reheated. This will cause all of the beta crystals to melt, which in turn causes your chocolate to look dull and cloudy. It may even form a white layer over the surface, which is actually fine - this is simply cocoa butter rising to the surface. It's completely edible if this happens.

One thing to note is that chocolate falls out of temper at about 90°F, so if you have chocolate that is already tempered and you don't want to re-temper it, make sure that it stays cooler than 90°F. Anything warmer than that, such as a hot kitchen or a closed-up car, will cause your chocolate to go cloudy and soft.

Why would you bother taking the time to learn how to temper chocolate? There are a few good reasons: 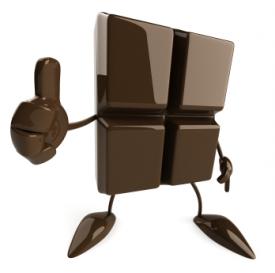 How to Temper Chocolate

Here is one method for tempering chocolate:

If you want to know more about learning tempering chocolate, there are lots of resources on the internet that will help you get the hang of the process. Check out these links for a little more assistance:

0
Comments
© 2006-2020 LoveToKnow, Corp., except where otherwise noted. All Rights Reserved.
How to Temper Chocolate