Who doesn't love fun chocolate facts? Chocolate is the world's most popular candy, and people all over the globe enjoy this tasty treat on a daily basis (and probably more than once!). Why not learn as much as you can about this "food of the gods?"

The Origin of Chocolate

How about a history lesson - where did chocolate come from? Originally native to North and South America, the Aztec people were the first to harvest cocoa beans and turn them into something edible. They also used chocolate as a major form of currency, since it was such a valuable asset in their civilization.

The Aztecs enjoyed an unsweetened chocolate drink called xocoatl, which when pronounced in their native tongue of Nahuatl sounds a lot like the English word "chocolate." Xocoatl was believed to be a very healthy drinks that fortified the body, nourished the soul and increased both intellectual and sexual potency. The Aztec people did now have any sugar at that point in time, so they seasoned their drink with chilis and corn meal. These days, you might see Mexican hot chocolate mixes that have a little bit of spicy cayenne pepper in them - this is a throwback to the Aztec drink xocoatl. You can also make Mexican hot chocolate at home (it also makes a tasty fondue!).

After he conquered the "New World," Cortes returned to Spain in 1528 and brought back with him the Aztec cacao beans that he'd discovered. Since chocolate was expensive and reported to have very powerful properties, it was reserved for only the wealthy class of Europeans. It soon spread though the upper class kitchens of France and Great Britain, where it was enjoyed by royalty. 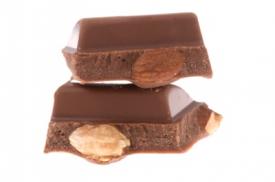 Want to know about chocolate?

Want to know more about chocolate? These fun chocolate facts are fun to share with your friends, especially over dessert or a warm cup of hot chocolate!